From Wiki-DB
Jump to navigation Jump to search 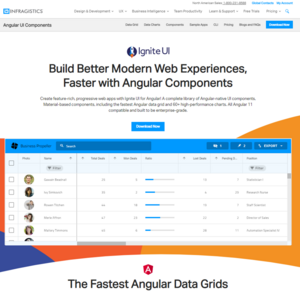 The "Infragistics Ignite UI" is a commercial WebUI framework based on Angular.
To test the browser perfomance a WebUI based on that framework was used. 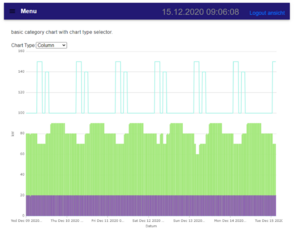 To open the screen in the above screenshot it takes approx. 3 seconds from menu click until content is fully visible

To get some insights the chromium profiling was used. 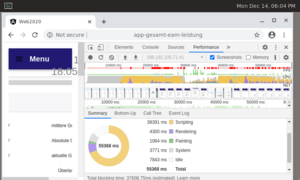 With the Chrome Profiler one can make following conclusions: 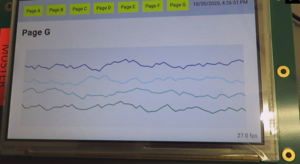 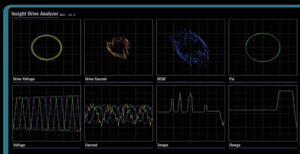 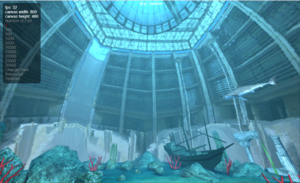 Running a webgl example page (fishtank) on the STM32MP1 (etnaviv) with Chromium under a resolution of 800x600 results in 3fps.

3D-animation and video as texture 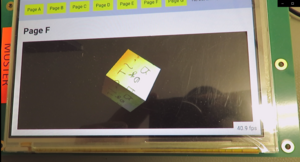 The cube runs very smooth with at least 40fps.

Webapplications must be optimized for particular embedded system resp. SOC. Heavy WebGL applications are not suited for this platform.
Nevertheless appealing web pages with responsive requirements on the STM32MP1 are possible. 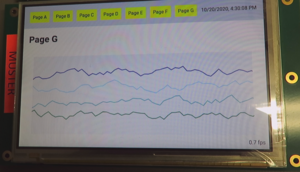 3D-animation and video as texture

The cube does not even show up on the screen.

Software Rendering (with no GPU) is no option on the STM32MP1 for graphical webinterfaces were responsiveness is required.

The drawElements Quality Program (deqp) is a benchmarking system for measuring the quality of GPUs and their drivers.


It can be started from the commandline with the following script (no display needed):

The deqp run on the STM32MP1 (etnaviv driver) gives the following results:

The full logs can be found here:
STM32MP1_deqp_logs.zip

A Glmark2 Benchmark was run on the STM32MP1 with an 800x600 resolution with the following command:

With the following results:

Tasks of the GPU

Some Toughts about Javascript performance

Is it correct, that since js is interpreted and is not thread safe, js of a single webpage does not make use of multithreading/multiprocessing?

JS is interpreted, yes. However, both the chromium v8 engine and firefox tracemonkey are JIT compilers and turn that JS into code native to the architecture on which they are running. This leads to a huge performance boost compared to simple interpreting. The JS JIT compilation can be parallelized.


JS is synchronous and has no concept of threads. However, there are these Promise() things and events (like timer callbacks). The JS engines generally have separate thread(s) to deal with such events, so the JS code can set up some "async" operation by calling a function (e.g. load something from somewhere) that triggers a JS function on completion. What happens is that the JS itself runs on CPU0, while a thread doing that loading runs on CPU1, and suddenly your javascript uses two CPU cores.


So if you add those two points above together, you get that contemporary JS engines and the way contemporary JS is written end up using multiple CPUs. It is just not done in the traditional manner and it does look like a lot of crutches indeed.

Chrome DevTools is a set of web developer tools built directly into the Google Chrome browser. It is possible to analyse the runtime performance of a website directly on the target or remote with an PC connected over ethernet. With an remote connection you can measure the performance without interfering the measurment itself. The Chrome DevTools can also be used with an qtWebengine.

How to use Chrome DevTools with an remote connection

To be able to remote debug chromium on the target you need to start the chromium or qWebengine with the following parameters:
-remote-debugging-port=9222 --user-data-dir=remote-profile

To access it from a different computer you need to forward the port with ssh:
ssh -L 0.0.0.0:9223:localhost:9222 localhost -N
This must be done before the webbrowser gets started.

With an Chrome Browser on an computer connected with the target over ethernet you can now open the devtools with the IP of the target and the port "9223".
This clip shows you how to open den chrome devtools within chrome: devtools-open.mp4

The following tools can be used for performance anlaysis:

devtools-performance-monitor-cpu.mp4
With this stat you can easily see when the CPU is under full load.

The graph shows when the GPU is under use. But it does not show the GPU load in percent.
It is a useful tool to see if the GPU is fully ocupied.
If the GPU is disabled (software rendering) this graph is absent. 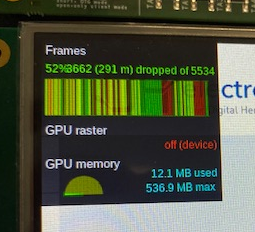 Newer chrome versions don't show live FPS anymore. But you can us "dropped" or "delayed" frames as indicator for good or bad performance. The higher the percentage value (frames rendered in time) the better.
A good explanation can be found here:
https://groups.google.com/a/chromium.org/g/blink-dev/c/iHULoSyUxOQ

devtools-start-performance-profiling.mp4
The performance profile gives you an overview over all important stats at once. You can record it while browsing through an website on the target.
You can save such profiles and import it with any other chrome browser to analyse the profile offline.