The Avenger96 board is the official DHCOR STM32MP1 reference design!

The AVENGER Board is a 96Boards compliant consumer edition board based on the STM32MP15 series of SoCs. The STM32MP15 series is a highly integrated multi-market applications processor designed to enable secure and portable applications within the Internet of Things. AVENGER board features Dual-core Arm® Cortex®-A7 processors operating at up to 650 MHz, Single core Arm® Cortex® M4 operating up to 209 MHz. In addition, an extensive set of interfaces and connectivity peripherals are included to interface to cameras, touch-screen displays, MMC/SD cards and media processor engine. It also fully supports wireless communication, including WLAN and BLE.

NOTE: Please also have a look at the STM32 MPU wiki: Links

NEW How to start with custom DHCOR design?
The patch below is an example patch which applies on top of u-boot v2021.01 and implements a custom board derived from 3V3 option of DHCOR STM32MP1 SoM. That's pretty much all you have to change to implement the board. But, please tweak the DTs esp. where there are the FIXME comments.
NEW 0001-ARM-dts-stm32-Add-DHCOR-based-FOO-board-u-boot-v2021.01.patch

!!! This project is NOT maintained from DH electronics!!! --> Please use the "DH Mainline based Linux" version for your project. The OpenSTLinux should only be used for testing !!!

Notes:
- Based on OpenSTLinux v3.0
- GPU support based on original vivante GPU driver.
- Based on kernel 5.10.x and Yocto version dunfell

Starter Image Changelog
This Image includes four different bootmodes to support some additional mezzanine boars. Click here to learn, how to change them.

To use the D3 mezzanine board with AV96 and the OV5640 camera, one has to apply the correct DTO first:

Afterward it is possible to stream frames from the camera:

How to load U-Boot with dfu-util 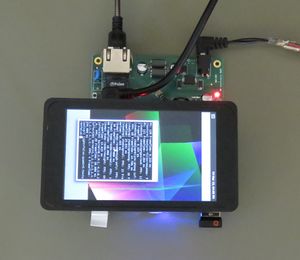 You can easily add an DSI display to your Avenger96 with the help of the DSI Display Adaptor Board. The display can be activated easily on our Mainline Image with a device tree overlay as described here. To get one of the boards, simply reach out to us and we'll prepare one for you.